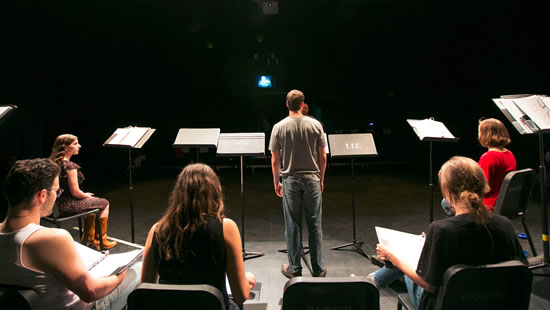 To be both a national and international leader in the development of new music theatre by connecting groundbreaking shows, writers and artists with top tier students, faculty and staff.

The American Music Theatre Project (AMTP) at Northwestern University partners leading artists in music theatre with Northwestern’s faculty, staff, and students to develop new musicals, bridging the educational and professional worlds through uniquely tailored new work processes. AMTP’s goal is to nourish and invigorate American music theatre by supporting writers in their early stages of development, creating new connections between the professional and academic communities, and increasing opportunities for education and training with Northwestern’s theatre, music theatre and dance programs. 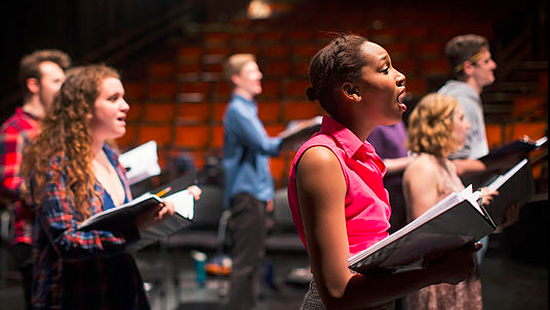 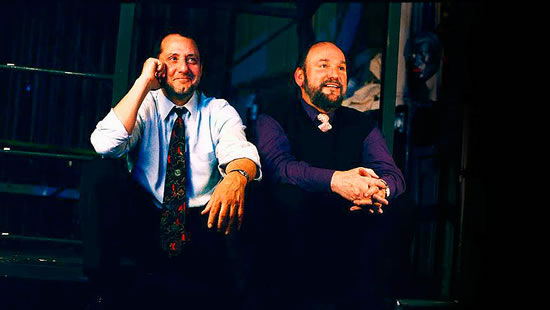 Founded in 1851, Northwestern University is one of the country’s leading private research and teaching universities. With its impressive infrastructure of facilities, faculty and students, and its progressive methods for teaching and learning, Northwestern welcomes artists and projects that benefit from a nurturing creative process and a means of introducing new work to the broader creative community. The American Music Theatre Project (AMTP) was founded by professor emeritus Dominic Missimi and Broadway producer Stuart Oken in May 2005 in Northwestern’s School of Communication. The first year of AMTP also marked the first year of a partnership with the Johnny Mercer Foundation, producing the annual Songwriters Project – a songwriting mentorship program for young and upcoming writers. In its first five years, AMTP produced full productions and developed new works by artists such as Benj Pasek & Justin Paul, Tina Landau, Andrew Lippa, Sheldon Harnick, and Michael Friedman. In the fall of 2010, David H. Bell was named the Artistic Director of AMTP when he assumed the position of Director of Music Theatre after Missimi. David brought renowned writing duos such as Claude-Michel Schönberg & Alani Boublil, Paris & Lamont Dozier, Joshua Salzman & Ryan Cunningham, and Michael Kooman & Christopher Dimond to campus to workshop their newest material. In 2016, Brannon Bowers was named Producing Director and AMTP artist Ryan Cunningham was named Associate Artistic Director of the project. That same year, AMTP established an ongoing partnership with the American Theatre Wing to bring one of the Jonathan Larson Grant recipients to campus each season, and established an international partnership with the Royal Conservatoire of Scotland to commission, develop and produce two new musicals at the Edinburgh Festival Fringe. With a renewed focus on early stage development, AMTP has helped develop over 30 new musicals in just the past five years and continues to be a leader in new work development around the world. 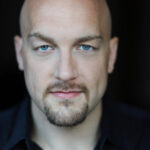 MR. ALEXANDER GEMIGNANI (Artistic Director) is an actor, music director, orchestrator, conductor, composer/lyricist, and educator. As an actor on Broadway: My Fair Lady (Doolittle), Rogers and Hammerstein’s Carousel (Enoch Snow – Tony, Drama Desk, Outer Critics Circle and Grammy Nominations), Violet (Father), Chicago (Billy), Les Misérables (Valjean – Drama League nomination), Sweeney Todd (Beadle – Drama Desk nomination), Assassins (Hinckley – Theatre World Award), The People In The Picture (Moishe), Sunday in the Park With George (Boatman/Dennis). Off-Broadway: Road Show at the Public (Addison Mizner – Drama League nomination), Headstrong at EST (Nick) and Avenue Q at the Vineyard Theatre (Brian). Favorite Regional: Hamilton in Chicago (King George III, original cast), The Three Sisters (Andrei) at Cincinnati Playhouse, The Boys From Syracuse (Sergeant) at The Shakespeare Theatre of D.C. and the title character in the world premiere musical Saint-Ex at The Weston Playhouse. Concerts: The N.Y. Philharmonic at Avery Fisher Hall, The N.Y. Pops at Carnegie Hall, The L.A. Philharmonic at The Hollywood Bowl and the American Songbook Series at Lincoln Center. His solo show, All At Once, premiered at the Kennedy Center as a part of Barbara Cook’s Spotlight Series. As a music director, he was represented Off-Broadway with Fiasco Theatre’s production of Merrily We Roll Along at the Roundabout (also penned new orchestrations) and is made his Broadway conducting debut as Music Supervisor for the 2019/2020 revival of West Side Story. TV/Film: Servant (Apple TV), Empire (FOX – Recurring), Chicago Fire (NBC), Homeland (Showtime – Recurring), The Good Wife (CBS), Empire State (ABC Pilot), the film The Producers (Universal), three appearances on The Tony Awards (CBS) and upcoming on season 5 of The Marvelous Mrs. Maisel (AMAZON – Recurring). Additionally, he made his conducting debut with the New York Philharmonic New Year’s Eve 2019 with the concert, Celebrating Sondheim, featuring symphonic suites and guest soloist, Katrina Lenk which aired on Live From Lincoln Center. As a composer/lyricist, he is currently developing two new musicals, Diamond Alice and swingset/moon, and has composed the incidental music for several plays. As an educator, he recently accepted accepted a position Northwestern University as Associate Professor of Instruction and Artistic Director of the American Music Theatre Project and has served on the faculty of the National Theatre Institute at The O’Neill and NYU Steinhardt. He has also served as guest faculty or guest artist for the University Of Michigan, Texas State University, Syracuse University (Tepper) and NYU Tisch School Of The Arts. He is a member of the BMI Lehman Engel Musical Theatre Writing Workshop and a proud graduate of The University of Michigan. 2018 marked the beginning of his tenure serving as Artistic Director for the National Music Theater Conference at The Eugene O’Neill Theatre Center in Waterford, CT where he has helped shepherd over 20 new musicals. His greatest joys are his beautiful daughter and his incredible wife, Erin Ortman. 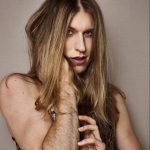 MX. BRANNON BOWERS (Producing Director) is a creative theatrical producer dedicated to new work and unexplored forms of performance, bridging genres, artistic mediums, and communities to make theatre accessible to all audiences. They joined the American Music Theatre Project in 2016 and during their tenure has developed over 40 new musicals and produced 6 shows at the Edinburgh Festival Fringe through an ongoing partnership with the Royal Conservatoire of Scotland. Brannon was a co-producer on the Wirtz Center’s mainstage productions of The Battlefields of Clara Barton and Something In The Game, and is in their seventh year of producing the Johnny Mercer Foundation’s Songwriters Project. Brannon is the creative producer of Get Out Alive, an autobiographical afrogoth musical by Nikki Lynette, which recently completed its first extended theatrical run and was developed into an award-winning independent film in 2021. Brannon has spoken on panels for the Edinburgh Festival Fringe, the National Alliance for Musical Theatre (NAMT), and the Segal Centre in Montreal, Canada. They are currently the Co-Chair of the selection committee for the NAMT Festival of New Musicals and has been a judge for the Chicago Musical Theatre Festival. Prior to their time at AMTP, Brannon worked at McCarter Theatre Center in Princeton, NJ, under Artistic Director Emily Mann where they coordinated readings and assisted on productions of new works by Emily Mann, Christopher Durang, Ken Ludwig, Nilo Cruz, Heather Raffo, Dipika Guha, and Sharyn Rothstein.  Brannon has held internships at Steppenwolf Theatre Company and Chicago Shakespeare Theater, and is a proud graduate of Northwestern University with a degree in Theatre, Gender & Sexuality Studies, and Integrated Marketing Communications.